Randy and Annette grew up in small towns near Madison, Wisconsin. After graduating from Madison Area Technical College in 1978, Randy began working as a Quality Control Technician and Annette as a legal stenographer. They were married in 1980 and moved to the  Chicago area. For the next three years, Randy was employed as a Quality Assurance Engineer, and Annette worked in a law firm in Elgin. It was during this time that they became Christians. A year later, Randy was a full-time student at Moody Bible Institute in Chicago while Annette took a job at a Chicago law firm. 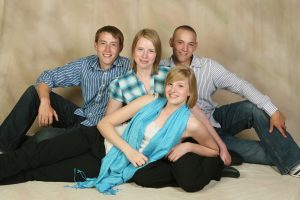 They have four children: Elya, Jeremiah, Luke and Tabitha. After the birth of Elya, Annette became a full-time mother. After graduating from Moody, Randy worked at the Chicago Tribune and became busy in various ministries:  in our local church, at Cook County Jail, and to the homeless on the streets of Chicago. From 1990-2000 he was an associate of Bible Related Ministries, an organization which assists local churches in time of need. He traveled and did pulpit supply, which was his main ministry until he was called to pastor the Bark River Bible Church in Bark River, Michigan, in 1993.

From March, 1993 to July, 2001, their family lived in Bark River, located in the Upper Peninsula of Michigan. While Randy served as pastor, Annette was involved in various ministries: president of the Women’s Missionary Society, AWANA Youth Group Leader, unofficial church secretary, overseer of the tract ministry; and of course as a pastor’s wife in addition to raising their four children. She was also involved in the Parent Teacher Organization at our children’s public school and volunteered there as she was able.

Randy graduated from Moody Bible Institute, Chicago, Illinois, in 1986 with a BA in Bible and a minor in evangelism. Annette earned a Certificate of Adult Bible Studies in 1995 through Moody’s correspondence program. In May 1999, Randy earned a MA in Ministry from Moody as well. He completed this program over a three and a half-year period while pastoring through taking modular courses and completing a project/thesis. The title of the project/thesis is, “Leadership Training in Doctrine for the Bark River Bible Church.” In July, 2001, they moved to Kiev, Ukraine, where we continue to serve with Crossworld.